Twenty years ago, when Linus Torvalds first announced his new operating system project to a Usenet discussion group, he had no way of knowing that his creation would one day conquer the world.

"Just a hobby, [it] won't be big and professional," Torvalds wrote on Aug. 25, 1991. In a follow-up post, he added, "Simply, I'd say that porting [the OS to a different CPU] is impossible." Torvalds had begun the project as a fun way to teach himself about the Intel 80386 processor and nothing more. His greatest ambition was merely to see it work.

It has done far better than that. Today, Linux -- as Torvalds's OS came to be called -- is available for just about every modern processor architecture and many archaic ones. It can power every kind of computing device, from PCs, netbooks, and smartphones to mainframes, supercomputing clusters, and beyond.

Linux is definitely "big and professional," having won the support of industry heavyweights such as Dell, IBM, HP, Novell, and Oracle. Red Hat, one of the first commercial Linux vendors, is now an S&P 500 company with a market capitalization of $7.3 billion.

The last 20 years haven't always been easy. Linux has made a few enemies, Microsoft foremost among them. It has faced its share of challenges, too, both technical and legal, and there are more hurdles ahead.

Nonetheless, as Linux enters its third decade, its opportunities have never been greater. Computing is changing, and Linux is not only benefiting from this change but is enabling it. Thanks to a shift beyond the PC, Linux is poised to become more than just an OS, but one of the most transformative forces in computing history -- and it's happening right under everyone's nose.

The OS the Internet built
That Linux is helping usher in a new computing age might come as a surprise to some. Linux has often been accused of following, rather than leading. Since 2003, the SCO Group has alleged that the open source OS violates intellectual property relating to Unix, and it's true that much of Linux's early market share came at the expense of costly commercial Unix variants, such as AIX, HP-UX, Solaris, and Tru64. Similarly, Microsoft has repeatedly claimed that Linux violates over 200 patents.

Linux has been innovative from its inception, however, in important ways. First, while the commercial Unix flavors ran on high-end systems based on RISC processors, Torvalds designed his OS for commodity Intel hardware, anticipating the trend toward low-cost x86 servers. Second, and even more crucial, while Microsoft was famously slow to adapt to the Internet, Linux has had the Internet at its core from the very beginning.

Summary: Firefox for Android will be familiar to those using Firefox on the desktop. 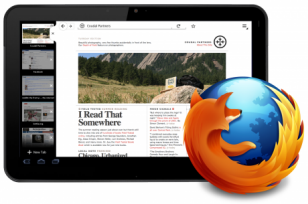 The Mozilla Mobile team has unveiled some of the user interface design decisions that it made in developing a version of Firefox for tablets.

Mozilla UI designer Ian Barlow takes us on a tour of the UI.

Next up - the Awesomebar. Love it or hate it, the Awesomebar is a core feature of the modern Firefox, and Firefox on the tablet will feature this one-stop-shop for bookmarks and history items. 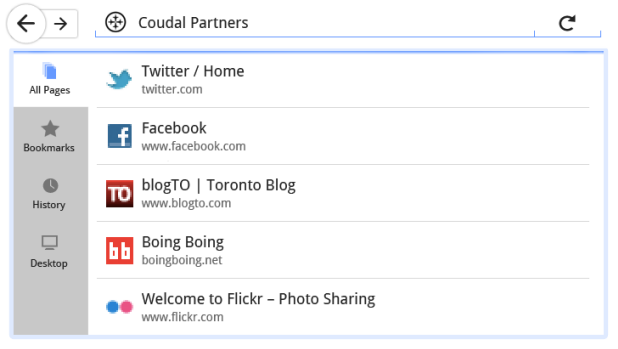 Finally, tabs. Mozilla is adopting two techniques here, depending on when the the tablet is held in landscape or portrait orientation. In landscape mode the tabs will be persistent in the left-hand bar )I hope this can be switched for left-paws - I’m not a left-paw, but I still think about those who are!) and hidden under a single tab icon when in portrait mode. 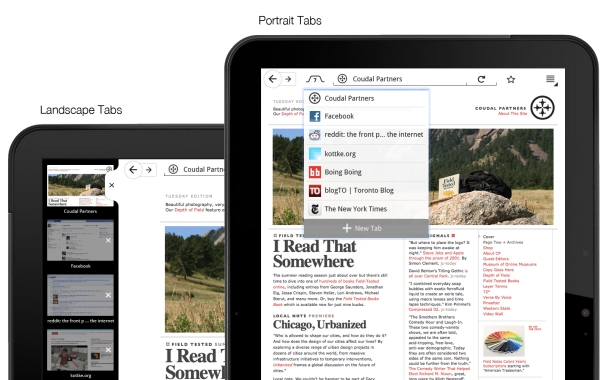 So, Mozilla has a beta of Firefox for Android handsets out already, and a tablet version is in the pipe.

By 2014, less than 20% of devices connected to the Internet will powered by Windows

Is the PC on the way out? VMware’s CEO Paul Maritz believes so.

“PCs are not the only animal in the zoo anymore” said Maritz during a speech at the annual VMworld conference yesterday in Las Vegas. And he sees the other animals as thinning down the PC herd dramatically as ‘increasingly, users are holding other devices in their hands.’

Maritz, at one time an executive for Microsoft’s desktop and server software platform division, sees HTML 5 as a catalyst for the PC’s demise:

HTML5 promises to be very, very important, because it could be a genuinely capable cross-device way of writing applications.

Personally, I think that the reports of the PC’s demise have been greatly exaggerated. Mobile devices are increasing in popularity, and web traffic from them as a result is increasing, but I don’t see this having much of an effect on the overall PC ecosystem for some time to come.

Is the PC (and by extension, Microsoft) in trouble, or will the overall growth in the market for devices mean that PCs will still outnumber mobile devices?

Summary: Java creator James Gosling has left Google for startup Liquid Robotics after only five months on the job.

Back in March, Google was only too pleased to announced that open source icon James Gosling, who created Java, had joined their ranks less than a year after leaving Sun. But it was to be short-lived, as Gosling announced yesterday that he’s left the Googleplex to work for startup Liquid Robotics as chief software architect.

I’ve surprised myself and made another career change. I had a great time at Google, met lots of interesting people, but I met some folks outside doing something completely outrageous, and after much anguish decided to leave Google.

For its part, Liquid Robotics designs autonomous vehicles - called “Wave Gliders” - that cruise the ocean at one or two knots, trawling for data that then gets uploaded to the cloud by way of WiMAX, GSM, and satellite uplinks. Each unit can stay out for years at a time, and Gosling says one has been out on the water for 2.5 years now.

The system works, Gosling says, but it’s not perfect. And that’s where he comes in:

I’m their new chief software architect. I’ll be involved in both the onboard software - sensing, navigation and autonomy - and in the datacenter, dealing with the in-rush of data. The current systems work well, but they have a variety of issues that I look forward to working on. This is going to be a lot of fun.

Liquid Robotics is helmed by CEO Bill Vass, a fellow Sun veteran who says in the company’s official press release that the addition of Gosling to his team will help “revolutionize global oceanic knowledge on a scale and dimension unknown in history.”

The company has Wave Rider deployments already in places like Gulf of Mexico, with Liquid Robotics’ research data being used by the National Ocean and Atmospheric Administration (NOAA) and various other oceanographic facilities. Back in June, Liquid Robotics closed a $22 million round of financing. In short, it sounds about as solid as a Silicon Valley startup can get.

When Gosling originally joined Google, many took it to mean that the search giant had a trump card in its ongoing Java patent battles against Oracle. But after only about five months, it looks like Gosling has left that legal minefield behind for something entirely new for him. Google testing voice search for web internationally. Here’s how you can try it now

Google has added voice commands to its desktop Web search tool for some international users, we’ve learned. This information is thanks to a tipster in Australia, who sent us a screen shot (seen above). We also have confirmation from a Google Chrome user in Germany who has been testing it out. U.S.-based Google Chrome users have been able to conduct voice searches for some time, perhaps since May, but we have not been able to confirm that the feature is available to all international users at this time.

Rather than type out a search query, with With Google’s voice search you’re now free to speak it, if your computer detects you have a microphone. This can be especially helpful for long strings of words, or when you don’t know the exact spelling of a word. If the feature isn’t enabled for you by default in Chrome, you can get the extension in the Chrome Web Store if you’re eager to try voice search out for yourself.

Last week we reported that Google added voice search to Google Maps and after testing audio recognition with w 1-800-GOOG-411, which was killed in October of 2010, it would seem that voice-based search is a natural evolution for the world’s most popular search engine. And it could be that while GOOG411 the product was axed, this is how the underlying technology lives on. Google first announced it was testing voice search on its blog in July.

We’ve checked pretty extensively, and haven’t found much chatter about Google internationalizing voice search yet. If you’re outside the U.S., and you’re able to use it, let us know where you are by adding your thoughts to the comments sections.

Amazon is testing a slick new site design, built with tablets in mind

It appears that online retail giant Amazon will launch a new, vastly improved version of its massively popular shopping website in the near future, overhauling its design that not only looks great on the desktop but has been designed to appeal to tablet owners, signalling that the company could soon announce the launch of its own tablet devices.

Only a small number of users have been granted access to the new design, some of which have voiced their surprise on Twitter, which now sports big tablet-friendly buttons and a bigger, more prominent, search bar.

Gone are the blue menus and buttons, making way for a slicker white and grey interface that reduces clutter and makes navigation a lot easier. From the screenshots that were shared with us (thanks Derek), Amazon has stopped its navigation menu from loading on page load, now displaying it when the user mouses-over the “Shop By Department” button.

Amazon makes sure that in its new design, it pushes the products most important to it. With the site sure to receive a huge number of hits when it announces its new tablet device(s), the company pushes its Instant Video, MP3 Store, Cloud Player, Kindle, Cloud Drive, AppStore for Android, Game and Software Downloads and Audiobooks – all services that would be perfect for a potential tablet buyer.

The retailer is expected to launch its new device(s) in October, possibly announcing them in the coming weeks. Suppliers have indicated that the company will receive around 2 million units before launch, suggesting the company is confident it can sell its Android tablets in the face of Apple’s iPad dominance.

Amazon may reduce the price of its tablets significantly to lower the barrier to entry into the tablet market for its customers, using its value-added services to recoup the money it loses from price reductions. With Amazon testing a new tablet-friendly design, an announcement can’t be too far off, we are sure we aren’t the only ones that are excited.