Picture this: an easy-to-digest, up-to-the-minute window on how your business is performing. To some, it may sound like the panacea for the over-burdened executive desperate for details on their key targets. For others it may merely conjure up images of dispiriting data dashboards; technology that has promised so much yet delivered so little.
Now, however, a new breed of advanced data visualisation tools are arriving that claim to make good on those pledges of instant insight. 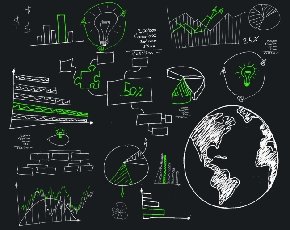 GETTY IMAGES/WAVEBREAK MEDIA
Part of the problem for many of the firms that wanted ready-made business performance information has been an over reliance on the wrong tools, says Jeremy Pile, technical director at food supply chain firm Muddy Boots. “By the time you've built a report using traditional business intelligence tools, it's out of date,” he says.
Muddy Boots acts as an intermediary between food suppliers and the UK's leading retailers, including Marks & Spencer. For example, if a retailer wants to ensure the quality of the food from its suppliers, Muddy Boots provides the data from the field to the shelf that shows how the produce has been cared for.

FOR MORE ON ADVANCED DATA VISUALISATION

To help bring that data to life, Muddy Boots relies on data visualisation tools from software maker Logi Analytics. “Customers want us to present information that shows them how any given supplier is performing at a given time. They may want to know if that performance is consistent with previous performance. Having visualisation tools makes that much easier,” says Pile.
One aspect that sets the new breed of data visualisation tools apart from their BI precursors is that they provide different ways to present data, says Eddie Short, EMEA head of data and analytics at consulting firm KPMG. “Information is beautiful,” he says. “There have been analytical tools for as long as we've had computers, producing charts, and so on. But what we're seeing now are tools that make it simple to understand the data.
“In the past, business reports were written by financial analysts and consumed by them and their management,” he adds.
Such reports might typically rely on bar charts, line graphs and the like; firms using advanced data-visualisation tools are more likely to be using bubble charts, geospatial heat maps or even word clouds.
Word clouds
Business intelligence purists might be sniffy about word clouds, but they turn out to be an excellent way of rapidly conveying important data, says Muddy Boots' Pile. “For example, if one of our customers suddenly starts seeing a word like ‘packing’ appearing prominently in their word cloud, it might give them the first inkling that there could be a problem,” he says.

By the time you've built a report using traditional business intelligence tools, it's out of date
Jeremy Pile, Muddy Boots

But there's more to advanced data visualisation than mere fancy new graphs, says Stephen Few, principal analyst at Perceptual Edge. Users are beginning to expect to be able to 'play' with charts, recompile them on the fly or drill into the data.
That in turn requires a set of tools that can pull data from disparate sources – not just structured sources but, potentially, a myriad of unstructured sources. And, yes, the tools may frequently even be required to bring sense to that over-hyped buzzword, big data.
Data visualisation at Volvo
At Volvo UK, Andy Johnson, a support and project analyst at the car maker, has been using BI tools to monitor various aspects of business performance for many years. These were systems initially based on green screen systems, he notes. Over the past 15 months, Volvo UK has begun to explore ways of using data visualisation tools to monitor performance using much larger data sets.
The firm has always received sales data from the UK's automotive trade body the Society of Motor Manufacturers and Traders, which helps Volvo track its performance against competitors. But historically, much of that data has been superfluous. “We target a fairly small fraction of the overall automotive market,” says Johnson.
Such practices are a common feature of trying to get business value from massive data sets, says Perceptual Edge's Few. “At any given moment, most of the data that we collect is noise. This will always be true, because signals in data are the exception, not the rule.” But it is the 'signals' that give business leaders the insights they crave.

What we're seeing now are tools that make it simple to understand the data
Jeremy Pile, Muddy Boots

The analytic and data visualisation tools, QlikView, enable Volvo not just to zoom in on the market segment it's competing in but compare how it is performing across the country, says Johnson. “Now, if we notice that sales have fallen unexpectedly in a particular location we might drill down and notice that one of our rivals has been offering a promotion in that region,” he explains.
But while the ability to create fancy charts using data from multiple sources is characteristic of advanced data visualisation tools, these are still capabilities that many traditional BI suppliers will claim for their products, says Short. To understand what really sets the new tools apart, you need to understand their underpinning philosophies, he adds.
Whereas typical business intelligence tools were built from a financial reporting perspective, with a bean-counter-like fixation on data accuracy, today's data visualisation tools have been influenced by the philosophies of human-computer interaction, says Short.
Human-computer interaction
Human-computer interaction (HCI) emerged in the early 1980s, as computer scientists began to infuse software design with ideas from cognitive science and human factors engineering. But while concepts of usability percolated into office productivity, it has made minimal impact on enterprise applications – at least until recently.

When we first started using our visualisation tools, we were quite prescriptive about how they should be used
Andy Johnson, Volvo

The impact of HCI on analytic tools may be most easily understood as yet another example of the "Apple effect" on the enterprise. As Volvo's Johnson explains, senior executives don't just want to be able to access data visualisations on their desktop, they expect it on their smartphone or on their tablet.
And here, users are also coming to expect business charts to embrace the same type of interactivity they've grown accustomed to with Apple's pinch-to-zoom capabilities, which set the iPhone's image-processing capabilities apart.
While traditional BI vendors might see this as a systems integration problem, HCI professionals approach it from a usability perspective. A prime example is the work presented by Mikkel R Jakobsen and his colleague Kasper Hornbæk, researchers in human-centred computing at the University of Copenhagen at the VIS 2013 conference held in Atlanta, Georgia in October 2013.
Their paper explored how well users could interact with data visualisations when using devices with displays ranging from that of a typical smartphone to mega-size multiple monitor type displays. It's often thought that the larger the display, the easier it is for people to work. But what Jakobsen and Hornbæk showed is that the time people take to complete tasks – in this case using maps – can actually be longer on a large display.
Other speakers at VIS 2013 also challenged the perceived wisdom over data visualisation, including Michelle Borkin from the School of Engineering & Applied Sciences at Harvard University. Her research demonstrated that the more data visualisations included annotations and decorations, often dismissed as "chart junk", the more memorable they became.

Customers want us to present information that shows them how any given supplier is performing at a given time
Jeremy Pile, Muddy Boots

Such observations are testament to the difficulty of successfully creating data visualisations. “If a business wants to get real insight from data – and not simply drown in it – it needs someone who understands both what the data presents and how to display the results,” says Short.
In many ways, advanced data visualisation tools fall neatly in line with one of the big trends in BI over recent years: the democratisation of analytics; taking data tools outside the purview of financial analysts and bringing them to the masses.
But to deploy advanced data visualisation tools propitiously, however, firms need to be wary of difference between this approach to data analysis and more traditional business intelligence. Creating successful data visualisations needs some capable of both "left brain" and "right brain"-type thinking, says Short. It's the ability to understand what the data means and how that can be presented – on whatever device – in such a way that it will immediately convey meaning to whoever looks at it.
“When we first started using our visualisation tools, we were quite prescriptive about how they should be used,” says Volvo's Johnson. “Then we began to see the ideas other people had and it opened up our thinking about what could be done."
But in can also be prudent to place a limit on users' freedoms as not every method of visualising data is useful, says Johnson. “It can be easy to get carried away,” he adds.
Publié par The IT Watcher à 16:05